In cooperation with
The American Law Institute (ALI)


The Background
In 2004, the ALI (American Law Institute) and UNIDROIT (the International Institute for the Unification of Private Law) adopted and jointly published ‘Principles of Transnational Civil Procedure’. The aim of the work was to reduce uncertainty for parties litigating in unfamiliar surroundings and promote fairness in judicial proceedings through the development of a model universal civil procedural code. The Principles, developed from a universal perspective, were accompanied by a set of Rules of Transnational Civil Procedure, which were not formally adopted by either UNIDROIT or the ALI, but constituted the Reporters’ model implementation of the Principles, providing greater detail and illustrating how they might be developed. The Rules were to be considered either for adoption or for further adaptation in various legal systems, and along with the Principles can be considered as a ‘model for reform in domestic legislation’.
In 2013, the ELI (European Law Institute) and UNIDROIT agreed to cooperate in order to adapt the Principles from a European perspective and develop European Rules of Civil Procedure. This work will take as its starting point the 2004 Principles and will develop them in the light of: i) the European Convention on Human Rights and the Charter of Fundamental Rights of the European Union; ii) the wider acquis of binding EU law; iii) the common traditions in the European countries; iv) the Storme Commission’s work; and v) other pertinent European sources.
The 1st exploratory workshop, to be held in Vienna on 18 and 19 October 2013, aims at an initial analysis of a series of different topics, ranging from service of process to enforcement, with a view to identifying the most promising issues and the most appropriate methodological approach for the project. The event will be divided into a public conference which gives a general introduction for a wider audience and an expert seminar which should lay the foundation for the elaboration of the ultimate project design by ELI and UNIDROIT. 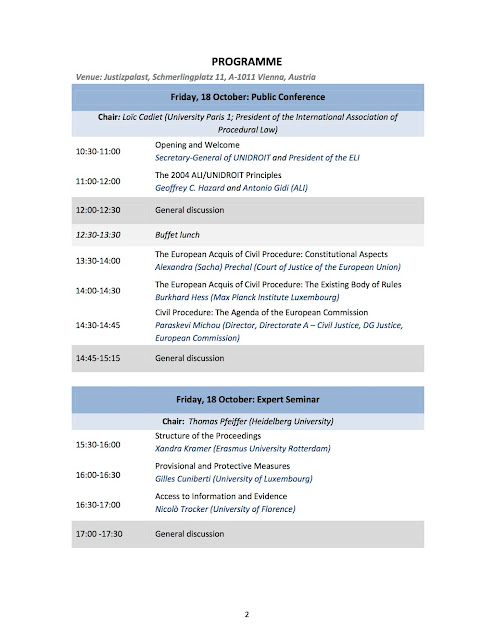 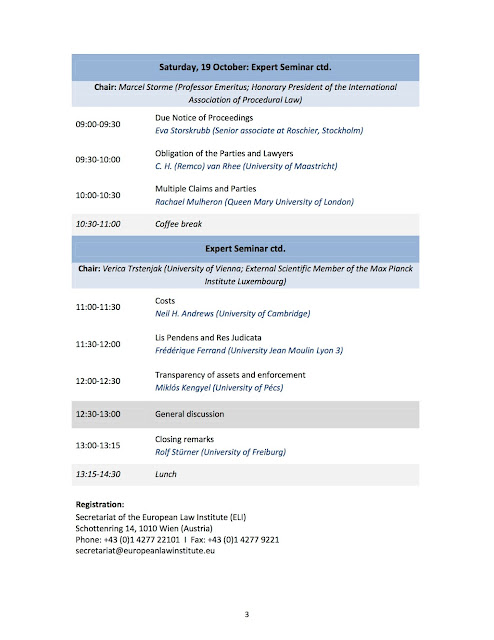